“Everyone needs to redouble efforts. It’s not just about getting donor development funding, we need to get catalytic capital in there and present agriculture as a commercial value proposition,” Debisi Araba 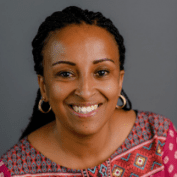